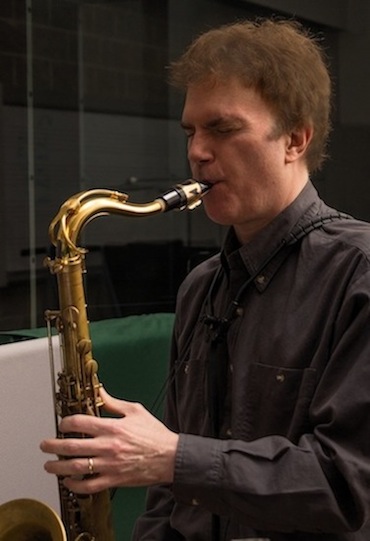 Rick VanMatre is one of the most exploratory saxophonists in the worlds of jazz, classical, and progressive music and has presented solo recitals, orchestral concerti, and jazz club performances in the US, Europe, Israel, Brazil, China, Korea, Thailand, and Australia. He is widely recognized for bringing a unique, identifiable voice to a variety of genres. In addition to recording with his own groups showcasing his compositions, he has also recorded as featured jazz soloist with numerous ensembles like the PsychoAcoustic Orchestra, the Kim Pensyl Ensemble, and the Cincinnati Pops Orchestra with Manhattan Transfer and John Pizzarelli. His diverse experience ranges from appearances with the most honored names in jazz such as the Duke Ellington Orchestra led by Mercer Ellington, the Woody Herman Orchestra led by Frank Tiberi, and an extended tour with the Tommy Dorsey Orchestra led by Buddy Morrow, to the contemporary Latin music of Roland Vazquez, to jazz greats like Frank Vincent, Dee Felice, John McNeil and Gene Bertoncini, to cutting edge composers like Tim Hagans. VanMatre has commissioned five crossover jazz/classical concerti and performed them with orchestras including the New York Repertory Orchestra, Sichuan Symphony Orchestra (China), Jeju Wind Orchestra (South Korea), and Cincinnati Chamber Orchestra. As a classical and jazz saxophonist, he has recorded interactive drama/music videos with composer/bassist Frank Proto and has appeared with the Cincinnati Symphony Orchestra, Kentucky Symphony, Rochester Philharmonic, Illinois Philharmonic, Middletown Symphony, Sheboygan Symphony, concert:nova, the Ariel Quartet, and James Conlon’s Linton Series. He holds the soprano chair in the New Third Stream Saxophone Quartet, an innovative ensemble combining jazz and classical elements. His collaborations have also included commissions and premieres of hybrid works featuring art installation, aleatoric computer music, organ, vocal ensemble, Indian music, drama, and multimedia presentations entitled “Earthkind-Humankind” showcasing poetry and dance.

Reviewing his CD Lines Above on Summit Records, Fanfare magazine wrote “VanMatre is simply an outstanding and awe-inspiring improviser and jazz composer.” The Chicago Star has written that “VanMatre’s art is without comparison; his technique exact, yet smooth, his expression poignant and personal,” and the Cincinnati Enquirer has stated that his “artistry was seamless, technically superb and musically inventive…His musicianship was so effortless.” VanMatre is also active as a conductor and has directed programs on American Jazz Radio Festival, NPR, and for artists like Kenny Garrett, Slide Hampton, Joe Henderson, Ahmad Jamal, David Liebman, Jim McNeely, Joshua Redman, Kenny Werner, and Kenny Wheeler. In the field of broadcasting, he served as the on-air host and interviewer for the nationally syndicated radio series “Jazz – Live From the Hyatt” featuring artists like Joe Lovano and John Clayton.

VanMatre is Professor Emeritus of Jazz Studies and Saxophone at the University of Cincinnati College-Conservatory of Music and still teaching there on a part-time basis. Formerly as the conservatory’s Director of Jazz Studies, he was responsible for expanding the BM in Jazz, creating the MM in Jazz Studies and the DMA in Saxophone, and establishing the Jazz Recording Studio. He also headed the CCM Visiting Artist Series, one of the most extensive in the nation, including over 150 important jazz performers and composers such as Wynton Marsalis, Christian McBride, Maria Schneider, George Duke, and Eddie Daniels. As conductor of the CCM Jazz Ensemble, he produced five CD recordings for Sea Breeze Records. Serenade in Blue was described by Cadence magazine as a “necessary part of any big-band enthusiast’s library” and Jazz News praised Carnival of Life as being “performed with conspicuous elegance and precision.”

He has presented performances and lectures for the International Association for Jazz Education, Music Educators National Conference, North American Saxophone Alliance, World Saxophone Congress, Jamey Aebersold Summer Jazz Clinics, International Summer Jazz Academy in Warsaw, Poland, and for universities, conferences, and all-state ensembles in the U.S., Europe, and Asia. He is an Honorary Member of the Sichuan Saxophone Society and the first western saxophonist to serve as visiting teacher and present a formal concert at the conservatory in the Xinjiang Uyghur Autonomous Region of China. He has written for Saxophone Journal, is on the Editorial Board for the Saxophone Symposium, has served as Executive Board Member and Jazz Coordinator for NASA, and was President of the Ohio Unit of the National Association of Jazz Educators.

VanMatre has been named “Best Jazz Musician” by Cincinnati Magazine, a “reed titan” by Midwest Jazz magazine, Ohio Jazz Educator of the Year by NAJE, and the “Ernest N. Glover Outstanding Teacher” by CCM students. In 2018 he was inducted into the Cincinnati Jazz Hall of Fame. His undergraduate studies were at the College-Conservatory of Music and Berklee College of Music, and he received his MM (Jazz Studies and Contemporary Media) from the Eastman School of Music. Many of his former students are active performers throughout the nation and others hold teaching positions at prominent universities. VanMatre is an endorsing artist for Selmer Saxophones and D’Addario reeds.